Parliamentary Candidate Layla Moran has been asking local residents to sign a petition requesting that the Conservative County Council Cabinet decides to keep the Marcham Road crossing at its current site with Cllrs Neil Fawcett and Samantha Bowring and the Lib Dem team. 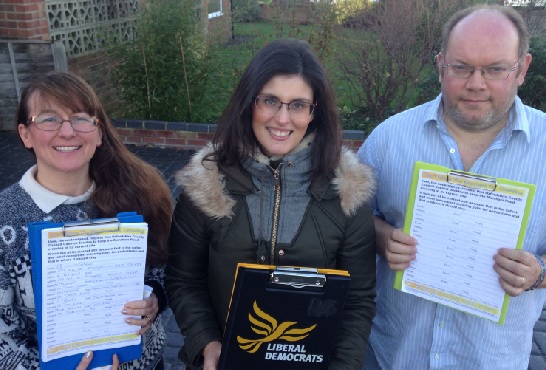 Layla, local South Abingdon Councillors Samantha Bowring and Neil Fawcett and the Lib Dem team have been speaking to residents in the south of Abingdon about the proposals to move the pedestrian crossing on the Marcham Road.

The County Council Cabinet will be making the final decision on whether or not to move the crossing on Tuesday 16th December. This is because Lib Dem County Councillor Neil Fawcett got the decision to allow the crossing move 'called in' to be looked at again.

If the County Council does decide to move the crossing, then the Drayton Road development will go ahead.

Commenting on the proposals, Abingdon South County Councillor Neil Fawcett said: "the new position of the proposed crossing will not be in the right place, especially for the many local children who use the crossing to get to school."

Layla Moran said: "we've been getting a great response on our petition and it is clear that many local residents share our concerns over the moving of this crossing and the impact it could have.

"With the Conservative County Council Cabinet making their decision about the proposal on Tuesday, I would encourage anyone who is concerned about the planned moving of the crossing to sign the petition and add your voice to those of other local residents."

You can sign the petition by following the link below: