Chair of the All Party Parliamentary Cycling Group and Lib Dem Cambridge MP, Julian Huppert, was invited by Layla to visit Oxford West and Abingdon to talk about cycling provision in the constituency. 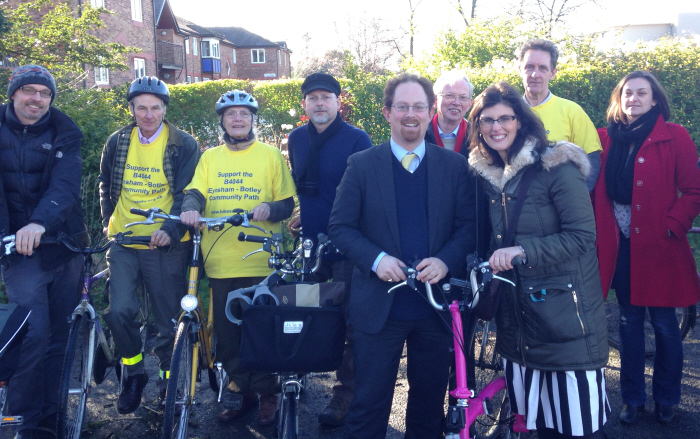 Commenting on Julian Huppert MP's visit, Layla said: "Julian has had some great successes implementing sustainable transport in Cambridge, including better provisions for cyclists. I invited Julian to come and speak in Oxford West and Abingdon at a public meeting on how he has achieved what he has in Cambridge and discuss some of the schemes and initiatives we could look to implement here in Oxford West and Abingdon."

Public Meeting on Cycling in Botley

Julian spoke to attendees about his work on the All Party Parliamentary Cycling Group, including the 'Get Britain Cycling' report. The report, which was published in April 2013, made 18 suggestions to Government. In September, Get Britain Cycling was debated in Parliament with all 18 recommendations being agreed. Julian discussed some of these recommendations, how he has looked to implement some of these recommendations in Cambridge and areas that should be considered in Oxford West & Abingdon and more widely across Oxfordshire.

In order to ensure that cycle provision was properly considered, Layla pointed to the need for strong and effective political leadership both in the constituency and in Westminster. Julian is pushing for a reallocation of transport budget resources to focus on sustainable transport. He is calling for £10 per person per year to be spent on cycling. Even a small reallocation like this would go a long way.

A key concern has been allowing for a better provision for cyclists on existing roads, in particular Julian made reference to safety concerns on many routes, such as the B4044 between Dean Court and Eynsham. Julian also highlighted the need for cycling to be included in planning for large infrastructure projects such as the Northern Gateway and the A34 from the beginning rather than being incorporated as an afterthought.

Layla and Julian both spoke about their support for initiatives like the proposed Community Path along the B4044. The Lib Dems proposed providing matched funding for such projects in their alternative County Council budget. Unfortunately both the Conservatives and Labour voted against the amendment.