Layla Moran, the Liberal Democrat Parliamentary Candidate for 2015, has said a big thank you for the wonderful reception she and the Lib Dem team received from local residents as she came a very strong second in May's General Election.

“I visited hundreds of doorsteps and got a lovely response from nearly everyone I met,” said Layla Moran.

“So while the result was disappointing the campaign was very enjoyable and I was particularly pleased to see that so many people here voted for me.” 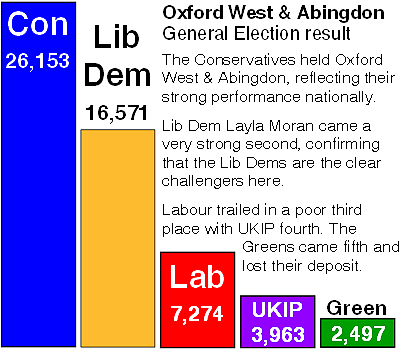 “We are already starting to see the Conservatives shift sharply to the right now that they have a majority,” added Layla.

And the Tories have shown their true colours by passing the Welfare Reform and Work Bill, which will mean a further £12bn in welfare cuts. The government passed the bill by 184 votes, and shockingly 184 Labour MPs abstained. Had they joined the Liberal Democrats in opposing the bill, it would not have passed. We need a strong opposition to the right wing Conservatives in parliament, not abstentions.

During the campaign we argued that we were the only party that could defeat the right wing Conservative in this constituency, and we were shown to be right.

I will continue to work with them, and local residents, to campaign against this right wing Conservative government, and for a fair deal for Oxford West & Abingdon.