Layla Moran, Lib Dem MP for Oxford West and Abingdon, has written to Cllr Ian Hudspeth, Conservative Leader of Oxfordshire County Council, asking him what efforts have been made to fast-track the Lodge Hill diamond junction.

Layla's request comes after the Government wrote to mayors and LEPs to try and identify ‘shovel-ready’ projects to move forward quickly whilst traffic levels are lower due to COVID-19. Layla asked the council leader whether a bid was put forward for this status to Government. In her letter, Layla says she asked the Government whether completion of Lodge Hill would be delayed due to the pandemic, but the Department for Transport said it would be up to the County Council to decide.

In her letter, Layla asked Hudspeth for an update on progress of the scheme, before challenging him to promote the junction as an “obvious candidate” to be fast-tracked with the Government.

Layla Moran said:  “Lodge Hill has been beset by delay after delay, and we need clear answers from Oxfordshire County Council as to whether it’s going to be delayed again due to coronavirus.

“It is vital that the diamond interchange is built before the housing estates planned for north of Abingdon are built. And the lockdown has shown us what a difference lower traffic levels make to the air quality and congestion in central Abingdon – Lodge Hill will help make that permanent.

“The Government offered councils an opportunity to fast-track ‘shovel-ready’ projects, and I sincerely hope Oxfordshire County Council put Lodge Hill forward for this scheme. It’s time the junction was delivered.” 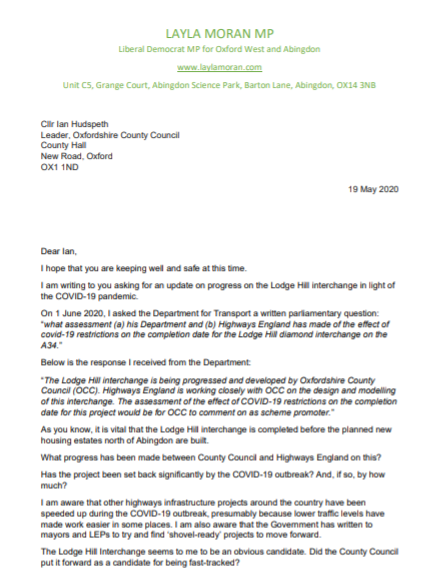 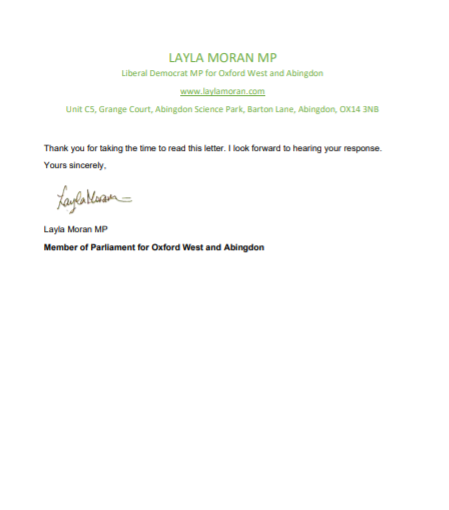