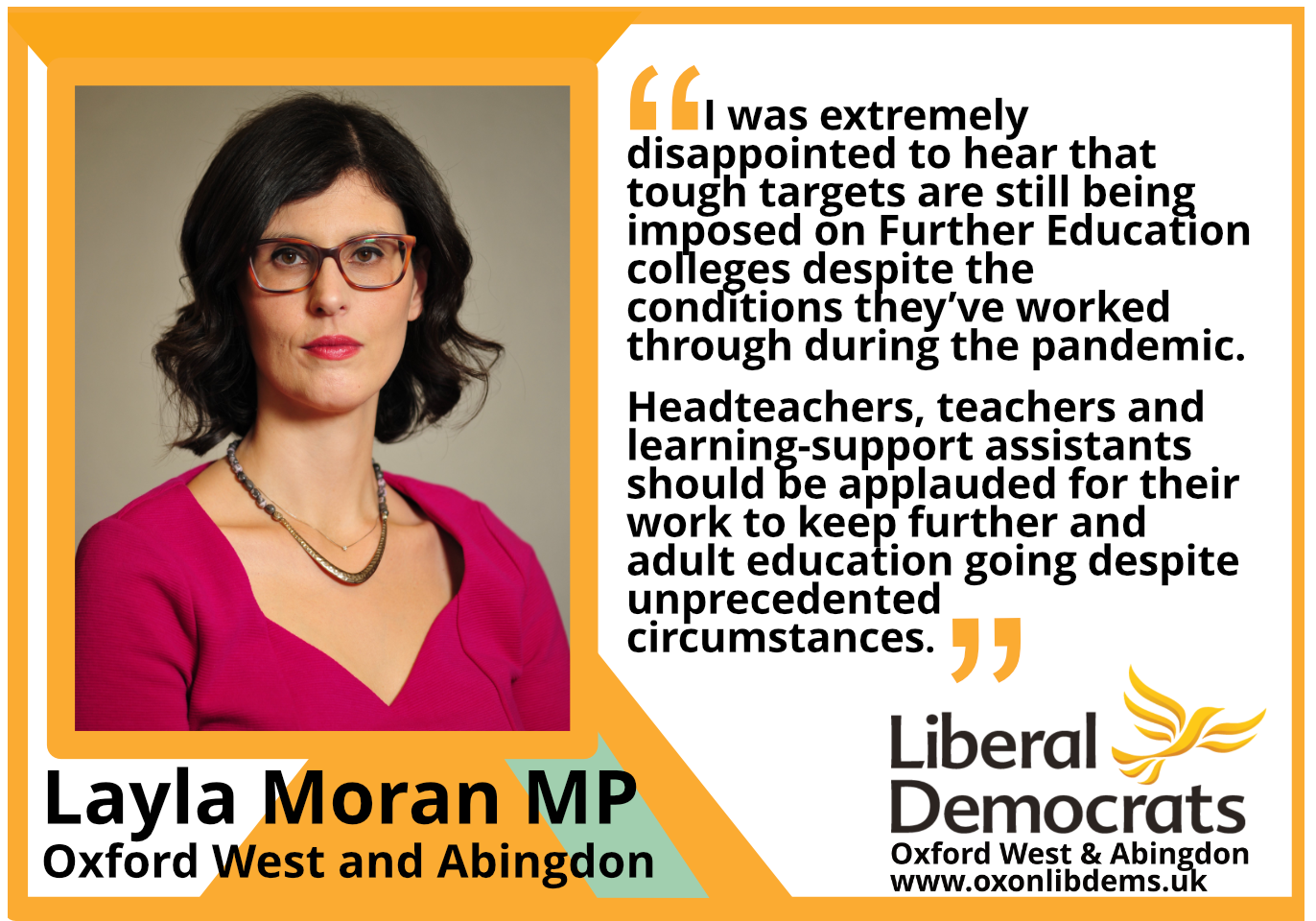 Layla Moran has written to Gavin Williamson, Secretary of State for Education, asking him to “urgently revisit” changes to adult education funding that could lead to colleges in Oxfordshire having funding clawed back by the government.

Layla's call comes after Abingdon & Witney College alerted Layla to a policy change that means the Adult and Skills Funding Agency will clawback adult skills money from colleges if they don’t meet a 90% target for their adult education budget allocations.

The funding target was lowered to 90% by the Government in March due to the pandemic, but the Association of Colleges and local providers such as Abingdon & Witney College have warned that the bar is still too high and will punish providers.

Layla said she was “extremely disappointed” to hear about the funding target and the impact it will have on further education in Oxfordshire, which risks hitting colleges’ budgets hard at an already difficult time.

In her letter, Layla asks the Education Secretary to introduce a lower threshold for funding targets, based on a better analysis of available data, and to create an appeals process that acknowledges that some areas have been hit harder than others, and allow for exceptional circumstances to be taken into account.

Layla said: “I was extremely disappointed to hear that tough targets are still being imposed on Further Education colleges despite the conditions they’ve worked through during the pandemic. Headteachers, teachers, and learning-support assistants should be applauded for their work to keep further and adult education going despite unprecedented circumstances.

“The Department for Education needs to urgently revisit these changes given the long-term effects this decision will have on adult further education programmes, re-education and reskilling our adult workforce. Letting this tough target stand would completely go against the Government’s own leveling-up agenda.”

Jacqui Canton, Principal of Abingdon & Witney College, said: “Like all colleges, Abingdon and Witney College has worked incredibly hard to support all its learners during the pandemic. We continued to teach live lessons online and started to re-introduce face-to-face lessons as soon as we were able to.  We believe that it is right that the Department for Education continues to support colleges by honouring the full funding allocation for this year so that we are in a strong position to help people to re-train and upskill in support of economic recovery.”