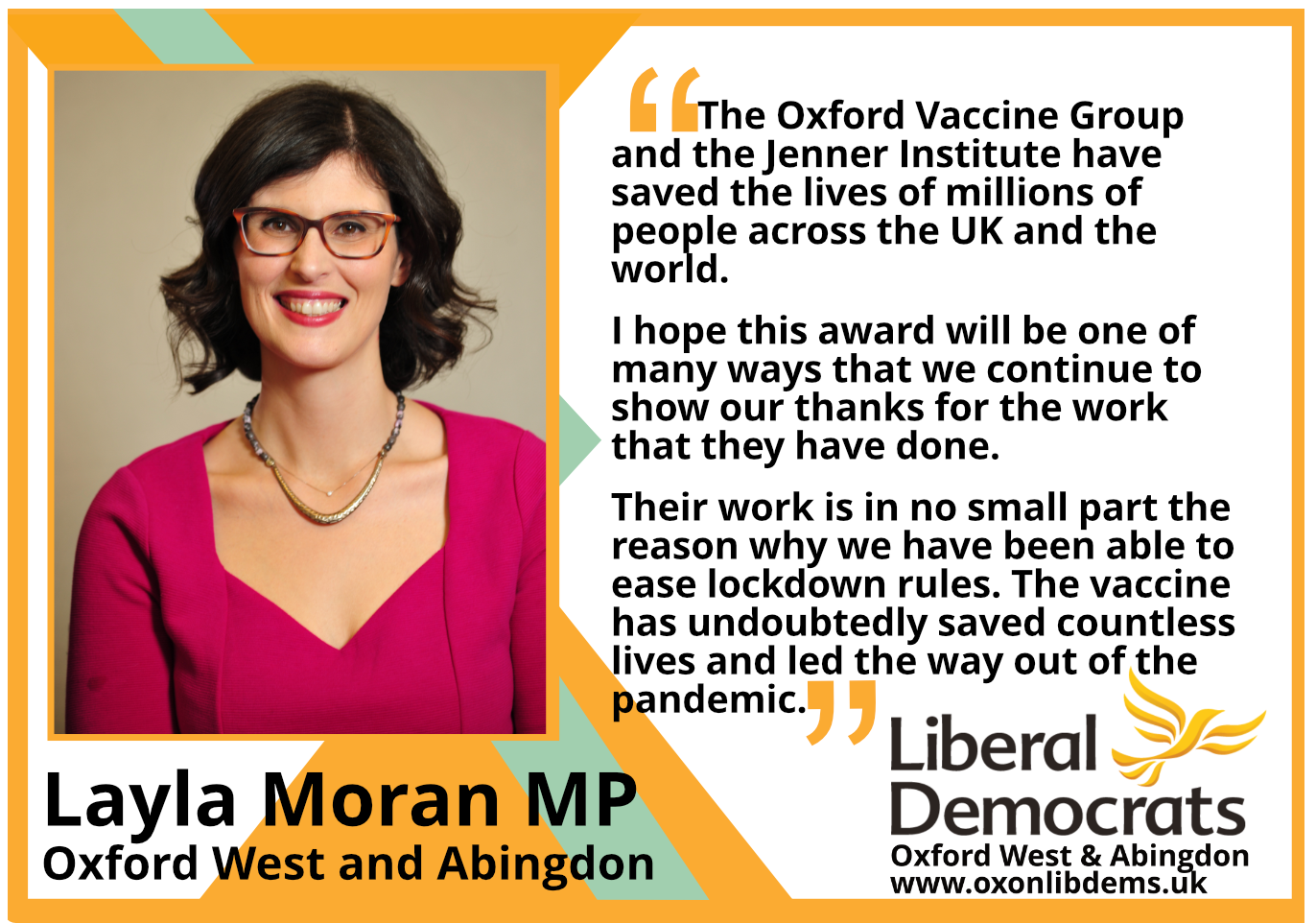 Layla Moran, Lib Dem MP for Oxford West and Abingdon, has congratulated the Oxford Vaccine Group and Jenner Institute for winning the Excellence in Healthcare Award at the NHS Parliamentary Awards for their outstanding achievements during the pandemic.

In September, Layla nominated seven individuals and teams of local heroes - including the vaccine group - for the different awards. This was followed by a tough judging process to whittle down the almost 700 nominees into a shortlist, for which the Oxford Vaccine Group and the Jenner Institute, both part of the University of Oxford, were chosen.

Oxford Vaccine Group and the Jenner Institute were one of seven entries shortlisted for the Excellence in Healthcare Award. They were nominated by Layla for their outstanding work fighting coronavirus by developing a vaccine in record time. Over 45 million doses of Oxford-AstraZeneca vaccine have been administered in the UK alone and over 550 million doses have been administered worldwide.

Layla said: “The Oxford Vaccine Group and the Jenner Institute have saved the lives of millions of people across the UK and the world. I hope this award will be one of many ways that we continue to show our thanks for the work that they have done. Their work is in no small part the reason why we have been able to ease lockdown rules. The vaccine has undoubtedly saved countless lives and led the way out of the pandemic.

“It was a pleasure to be able to attend the NHS Parliamentary Awards. NHS staff have done a remarkable job throughout the pandemic so it was lovely to spend time congratulating and thanking everyone for their ongoing work.”

Dr. Maheshi Ramasamy, Consultant Physician at the John Radcliffe Hospital and Principal Investigator at the Oxford Vaccine Group said: “The Oxford AZ vaccine project demonstrates the incredible teamwork that is such an important part of the NHS. Doctors, nurses, and scientists not just here in Oxford, but at 19 hospitals around the UK, have worked hard to deliver the clinical trials that led to the approval of the Oxford AZ vaccine. The vaccine itself is being administered by an army of NHS staff and volunteers up and down the country. It is an honour to receive this award on behalf of the many people who have played their part in the battle against COVID-19.”

Layla submitted the following nominations for the NHS Parliamentary awards: