Layla Moran, Lib Dem MP for Oxford West and Abingdon, has written to the Education Secretary to express her “concerns about the implications” of the inclusion of Extinction Rebellion on a list of terrorist and extremist organisations “for our schools and children.”

The MP, who is addressing the student climate strike in central Oxford today, took the Government to task for the document, first uncovered by The Guardian, which has since been recalled.

Despite this, Moran in her letter wrote that the “episode also carries significant implications for free speech, inside and outside of the classroom: can a student truly voice their opinion if they are worried that their teacher might report them?” She continued: “It is frankly worrying that this is a question that even needs to be asked.”

The document that included Extinction Rebellion, circulated by Counter Terrorism Policing South East (CTPSE) in November to their statutory partners including teachers, put the non-violent campaign group alongside proscribed organisations such as the neo-Nazi National Action as a group to watch out for.

This meant that teachers would have been mandated to report activities matching those listed in the document under Extinction Rebellion, such as using ‘emotive’ language to talk about climate change, to the Prevent programme.

“I was shocked to discover the inclusion of Extinction Rebellion in this document by the police, equating the campaigners’ non-violent actions with those of violent extremist organisations.

“How did they end up on this list in the first place? I am seeking assurances from the Education Secretary that he will investigate this, due to the implications this episode has for free speech and educating children about climate change.

“We are in a climate emergency. I wish Extinction Rebellion and the student strikes didn’t need to happen, but I will continue to support their protest until they are listened to.” 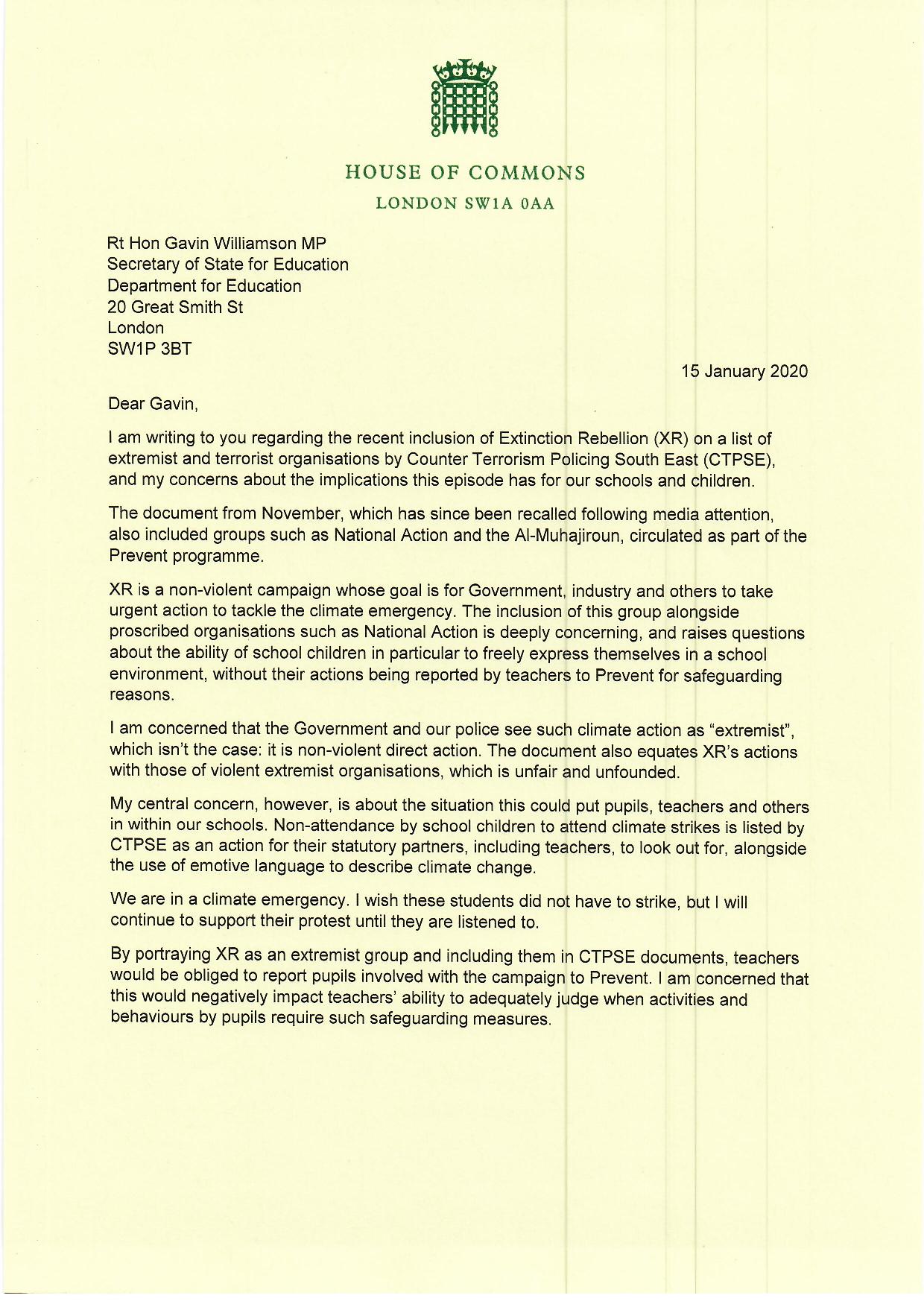 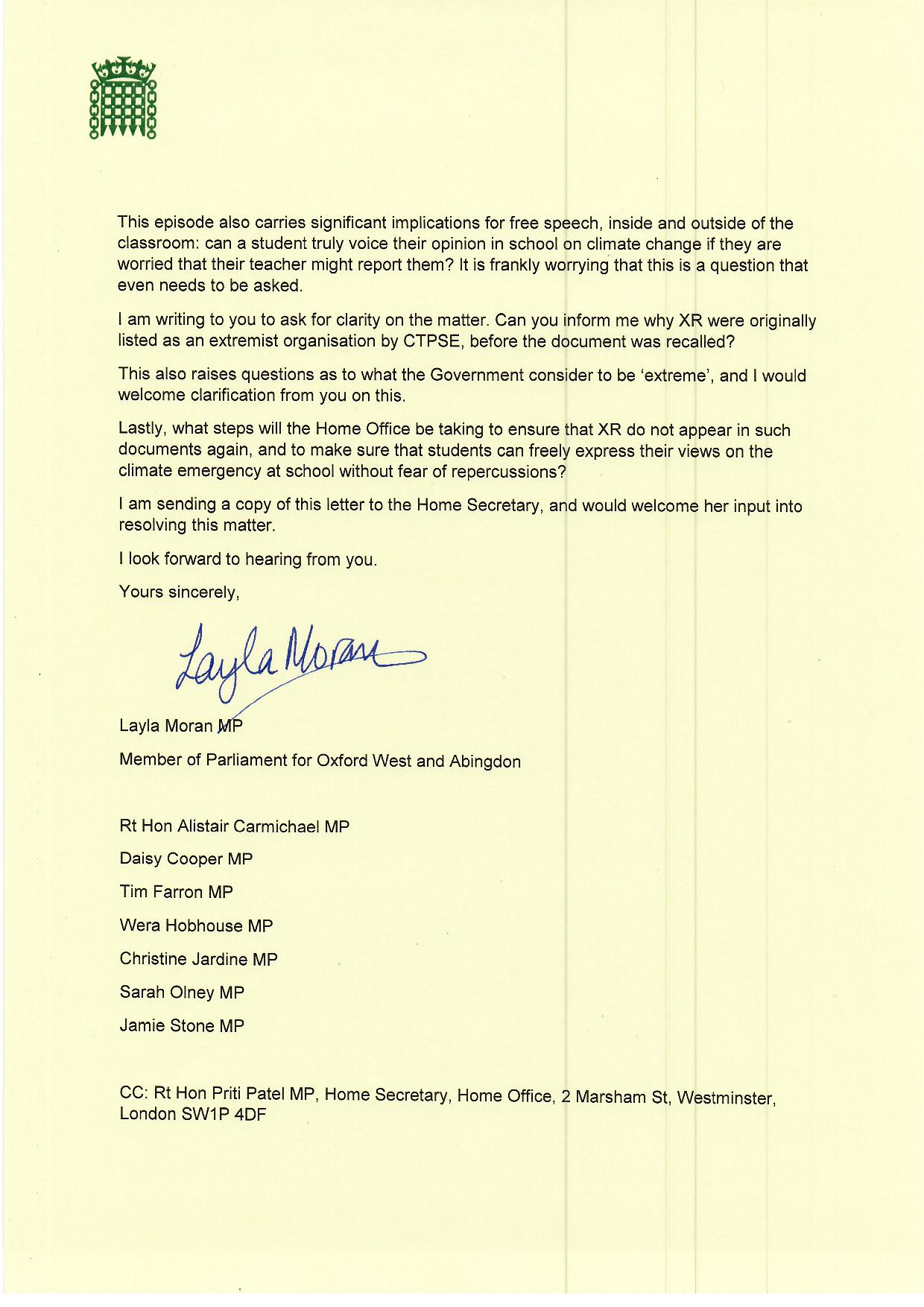 Secretary of State for Education

I am writing to you regarding the recent inclusion of Extinction Rebellion (XR) on a list of extremist and terrorist organisations by Counter Terrorism Policing South East (CTPSE), and my concerns about the implications this episode has for our schools and children.

The document from November, which has since been recalled following media attention, also included groups such as National Action and the Al-Muhajiroun, circulated as part of the Prevent programme.

XR is a non-violent campaign whose goal is for Government, industry and others to take urgent action to tackle the climate emergency. The inclusion of this group alongside proscribed organisations such as National Action is deeply concerning, and raises questions about the ability of school children in particular to freely express themselves in a school environment, without their actions being reported by teachers to Prevent for safeguarding reasons.

I am concerned that the Government and our police see such climate action as “extremist”, which isn’t the case: it is non-violent direct action. The document also equates XR’s actions with those of violent extremist organisations, which is unfair and unfounded.

My central concern, however, is about the situation this could put pupils, teachers and others in within our schools. Non-attendance by school children to attend climate strikes is listed by CTPSE as an action for their statutory partners, including teachers, to look out for, alongside the use of emotive language to describe climate change.

We are in a climate emergency. I wish these students did not have to strike, but I will continue to support their protest until they are listened to.

By portraying XR as an extremist group and including them in CTPSE documents, teachers would be obliged to report pupils involved with the campaign to Prevent. I am concerned that this would negatively impact teachers’ ability to adequately judge when activities and behaviours by pupils require such safeguarding measures.

This episode also carries significant implications for free speech, inside and outside of the classroom: can a student truly voice their opinion in school on climate change if they are worried that their teacher might report them? It is frankly worrying that this is a question that even needs to be asked.

I am writing to you to ask for clarity on the matter. Can you inform me why XR were originally listed as an extremist organisation by CTPSE, before the document was recalled?

This also raises questions as to what the Government consider to be ‘extreme’, and I would welcome clarification from you on this.

Lastly, what steps will the Home Office be taking to ensure that XR do not appear in such documents again, and to make sure that students can freely express their views on the climate emergency at school without fear of repercussions?

I am sending a copy of this letter to the Home Secretary, and would welcome her input into resolving this matter.

I look forward to hearing from you.