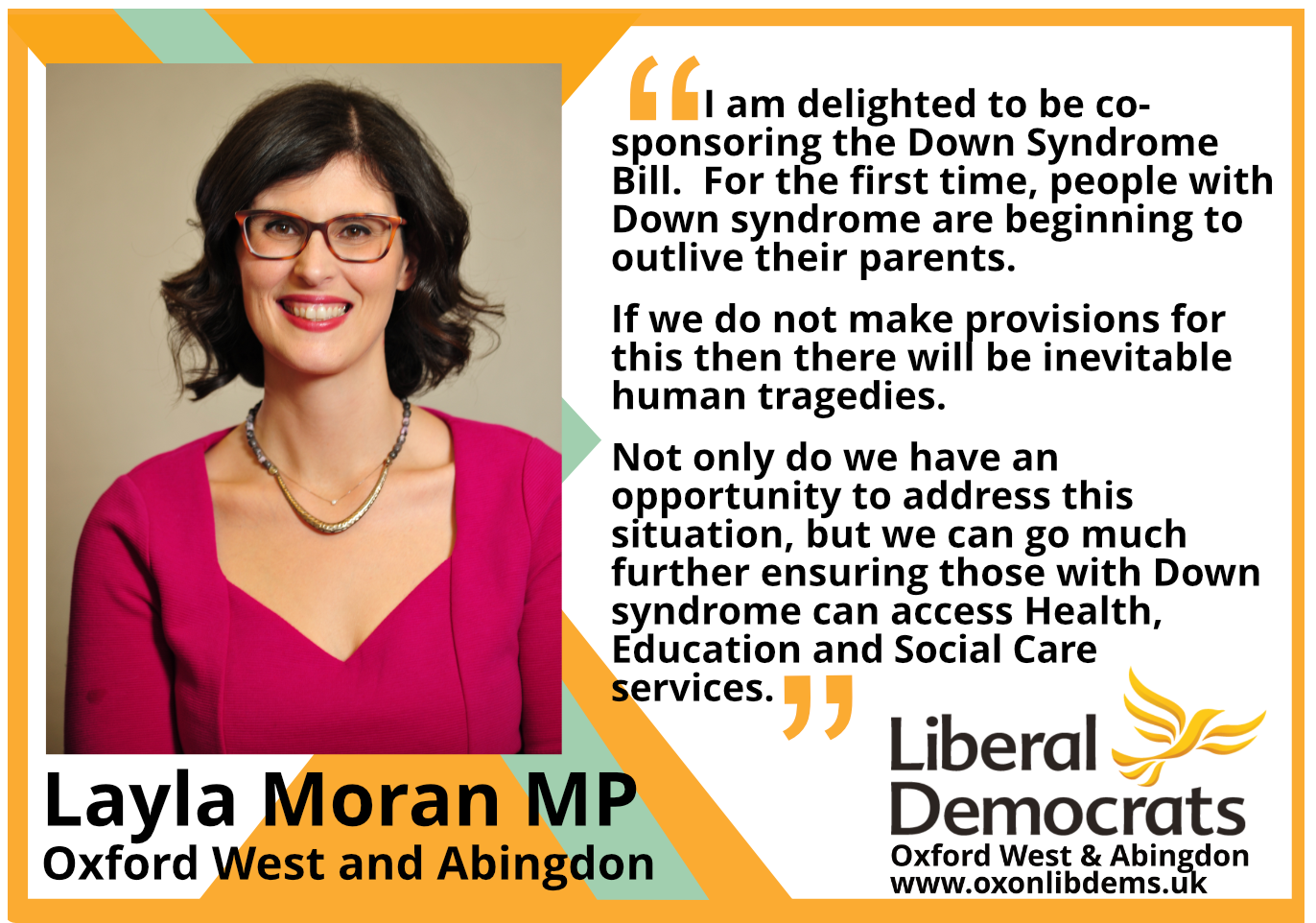 Layla Moran, Lib Dem MP for Oxford West and Abingdon, recently joined colleagues from across Parliament to support the Down Syndrome Bill which was debated in the House of Commons on 26th November. The Down Syndrome Bill was introduced as Dr. Liam Fox’s Private Members’ Bill, and Layla has supported this bill as one of its cosponsors.

The Government recently announced last week that it will support the Down Syndrome Bill.  This means the Down Syndrome Act 2022 (as it will become) will improve provision and outcomes for all those living with Down syndrome in England.  This will encompass, amongst other areas, maternity care, education, health, social care, and employment.

The National Down Syndrome Policy Group has launched a new campaign in support of the Bill. The ‘Stand Up for Down Syndrome’ campaign includes a Change.org petition which has attracted the signatures of over 30,000 people with Down syndrome, their families, and supporters.  Thousands of constituents have written to their MPs as part of the campaign urging them to support the Bill.

Many of those taking part in the campaign have shared photos of their children with Down syndrome on social media to help send a strong message about the importance of the Bill.

Layla Moran said: “I am delighted to be co-sponsoring the Down Syndrome Bill.  For the first time, people with Down syndrome are beginning to outlive their parents.  If we do not make provisions for this then there will be evitable human tragedies.  Not only do we have an opportunity to address this situation, but we can go much further ensuring those with Down syndrome can access Health, Education and Social Care services.”

Down Syndrome Bill sponsor, The Rt Hon Dr. Liam Fox MP said: “I am thrilled to bring forward a Bill to deal with the issues faced by those with Down syndrome.  My aim is to deal with three main areas.  The first is to de-stigmatise Down syndrome.  The second is to ensure that current provision of services is improved.  The third is to look ahead and deal with future issues, such as long-term care, in an era where, for the first time, many of those with Down syndrome will outlive their parents.”

Actor, CBBC presenter, and Trustee for the NDSPG George Webster said: “We are all very excited that Dr. Liam Fox is sponsoring a Bill with the aim of improving the lives of people living with Down syndrome.  I would like to see the Bill becoming law, then I think everyone like me with Down Syndrome will get better healthcare, more access to services, and be more included in society.  It is possible. It happens for some now, but it shouldn’t be a lottery.”

BBC’s Line of Duty actor Tommy Jessop said: “Everyone needs help now and then. We just need chances in life like anyone else.”

Actor Stephen McGann, who stars in the BBC’s Call the Midwife drama series, posted on his Twitter account: “My late Brother-in-Law David was someone with Down Syndrome - someone whose life would certainly have been enhanced by greater recognition support and expertise.  There is so much more we can do for people like him”

Peter Brackett, Chair of the NDSPG said: "The Down Syndrome Bill is essential to address the specific deficiencies and barriers faced by people who have Down syndrome and we hope that MPs across all parties will vote for this Bill.  We will work hard to support any information needs those politicians may have to ensure they are fully informed about the issues before the vote.

Societal infrastructures need to be in place to progress the rights of this community.  When enacted we will finally have legislation to ensure every stage in the lives of these people are protected and enhanced.  Only through this can people with Down syndrome achieve their rightful place as recognised individuals, contributing towards a better, inclusive society.”