Layla votes to protect over 19,000 pensioners in Oxford West and Abingdon hit by Conservative broken promise on triple lock 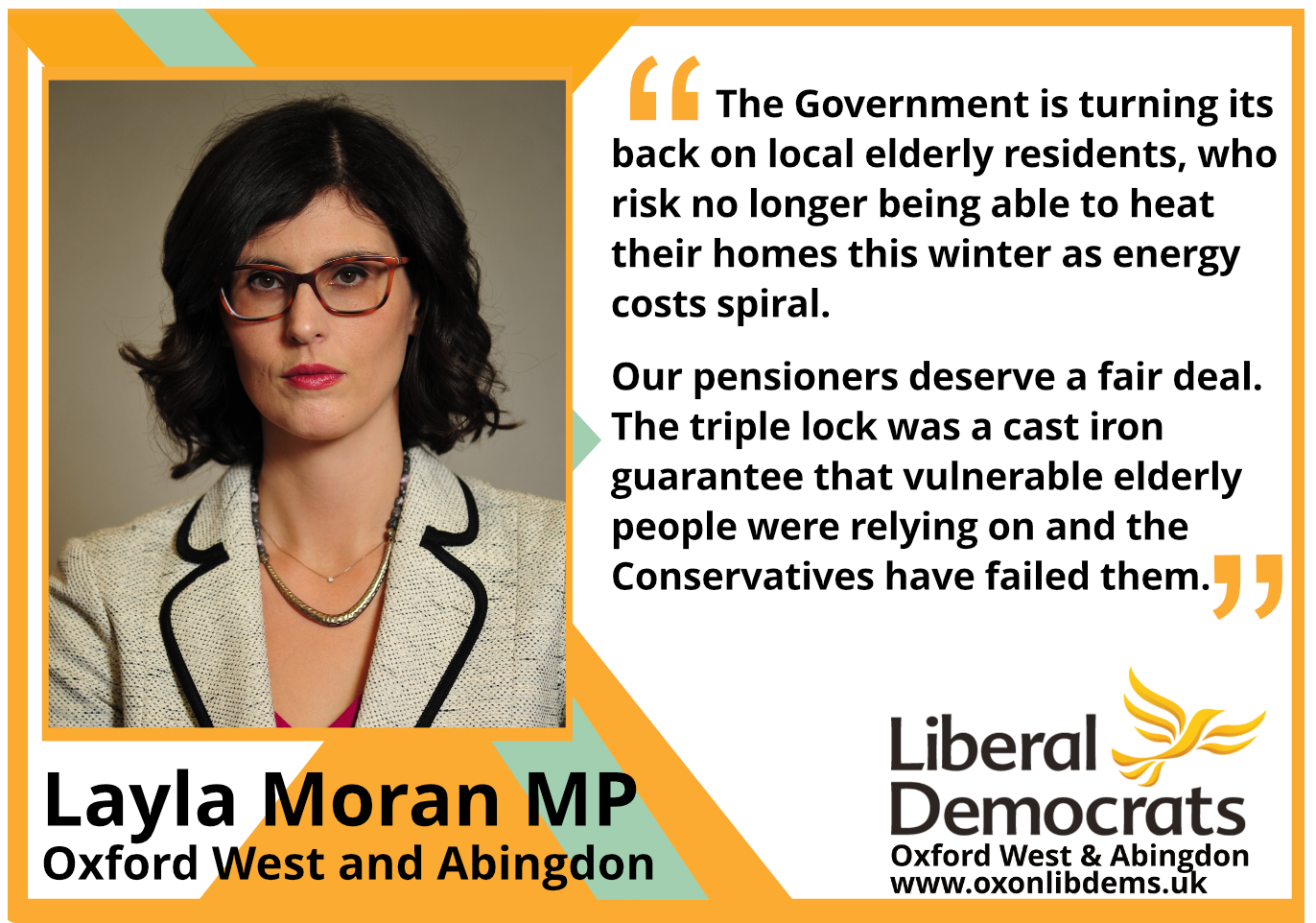 Layla Moran, this week voted to maintain the pensions triple lock and protect over 19,000 of her constituents who stand to be affected by its suspension. Figures published by the Liberal Democrats show that 19,698 state pensioners in Oxford West and Abingdon are set to be impacted by the Government breaking its manifesto promise.

The state pension triple lock is a rule that means the state pension must rise each year in line with the highest of three possible figures, inflation, average earnings or 2.5%.

It follows a vote in Parliament on the issue on Monday in which Conservative MPs voted to suspend the triple lock. This is despite a Conservatives manifesto commitment to keep the triple lock in place until 2024 and comes just weeks after Boris Johnson led his Conservative MPs to vote for a promise-breaking tax hike on National Insurance. The Liberal Democrats have warned that the Conservatives are “turning their back on local elderly residents,” many of whom are living in poverty.

The figures, based on analysis by the House of Commons Library commissioned by the Liberal Democrats, show that 17.9% of people in Oxford West and Abingdon will be hit by the government's broken promise. They also show that 1,170 pensioners in the area are benefiting from State Pension Credit, which is given to the poorest pensioners.

The Liberal Democrats tabled an amendment in Parliament to the Social Security Bill that called for additional support to address the impact of the pandemic on the two million pensioners currently living in poverty and making the uplift to Universal Credit permanent. Labour abstained on the vote, making the Liberal Democrats the only major UK-wide party to stand up for pensioners and oppose the government’s broken promise to them.

Commenting, Layla Moran MP said:  “This is yet another broken promise from the Conservatives that will hit pensioners in Oxford West and Abingdon hard in the pocket. The Government is turning its back on local elderly residents, who risk no longer being able to heat their homes this winter as energy costs spiral.

Our pensioners deserve a fair deal. The triple lock was a cast-iron guarantee that vulnerable elderly people were relying on and the Conservatives have failed them. Liberal Democrats are demanding that the government supports the many pensioners in our area living in poverty and ensure that we don’t return to the days of the 75p rise to the state pension.”