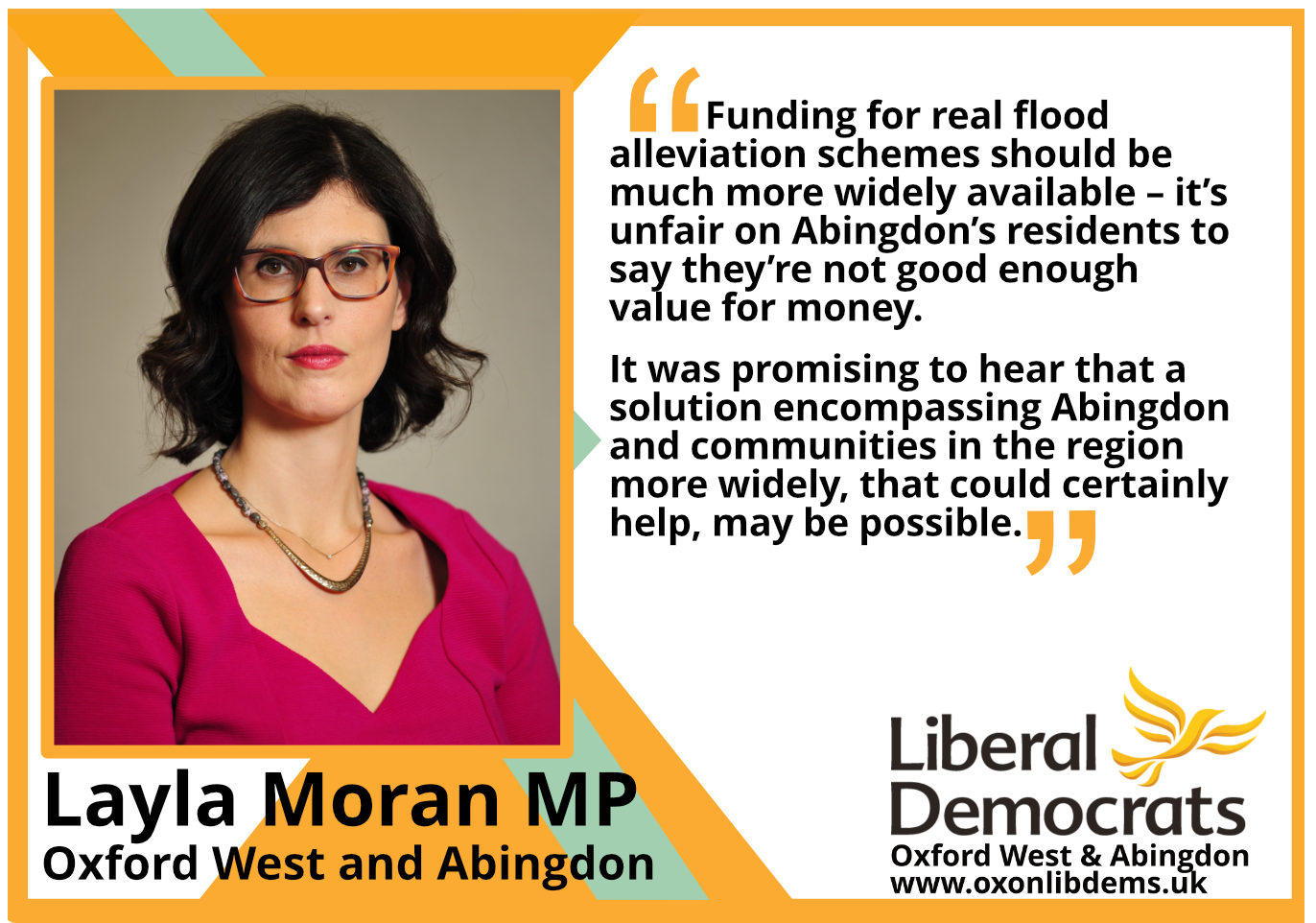 Layla Moran has met with Rebecca Pow MP, the Flooding Minister, together with Defra and Environment Agency officials, to discuss flooding in her constituency and press them to do more to protect Oxfordshire residents in the future.

The meeting came after Layla secured an adjournment debate in February on the issue, in which she asked for a meeting with the Minister. In the debate, Layla said: “We can either act proactively and future-proof our communities against flood devastation, by doing what we can sooner in Oxford, funding the Abingdon scheme, and fixing the [Environment] agency’s approach in Yarnton and other villages, or we can wait until it is too late, react desperately after the fact, and see more and more homes damaged and people’s lives ruined.”

During the meeting last month, Layla raised the need to find a funding solution for the Abingdon Flood Alleviation Scheme and asked the Environment Agency, who was also present, to continue to work with and listen to, South Hinksey’s residents to minimise disruption to their lives caused by construction of the Oxford Flood Alleviation Scheme.

Layla also urged the Government to work with Thames Water to address pumping station and capacity flow issues affecting Yarnton, Kidlington, and Radley to ensure they are fit for the twenty-first century. It comes after issues in the recent floods in 2020/21 that left some streets flooded with raw sewage.

Layla said she was “hopeful” following the meeting that solutions could be found.

Speaking after the meeting, Layla said: “I’d like to thank the Minister and the Environment Agency for meeting with me. I was very clear that my constituents deserve better than the flood protection they currently have.

“Funding for real flood alleviation schemes should be much more widely available – it’s unfair on Abingdon’s residents to say they’re not good enough value for money. It was promising to hear that a solution encompassing Abingdon and communities in the region more widely, that could certainly help, may be possible. We also need Thames Water to invest in infrastructure now to fix the very real problems that people currently have, but also to make sure the situation doesn’t get any worse when new housing is built.

“I won’t stop working on this until the residents of Abingdon, South Hinksey, Yarnton and elsewhere get what they deserve – real protection and infrastructure that is properly maintained. I asked the Government to help our efforts and work with the Environment Agency and Thames Water to make improvements for our community.”