Moran: time for Government and councils to “get around the table” to find way forward for South Oxfordshire Local Plan

Layla Moran, Lib Dem MP for Oxford West and Abingdon, has written to the Secretary of State for Housing, Communities and Local Government calling for “considered discussion, and compromise” over the South Oxfordshire Local Plan.

The MP wrote to Robert Jenrick in response to his letter to South Oxfordshire District Council (SODC), in which he suggested that central government could take over the plan from the local authority. Layla said that Jenrick’s actions are “being seen as very heavy handed.”

In the letter, Layla notes that the current issues are due to the fact that the political makeup of SODC and other district councils changed following May’s local elections and says that there is a “clear mandate to reflect the wishes” of residents.

Moran also reassures the Government that the SODC Cabinet’s desire to withdraw the plan, and begin developing a new plan for delivery within three years, will not affect planned housing levels in and around Didcot, and so will not compromise the County Council’s Housing Infrastructure Fund (HIF) bid to Whitehall.

The MP criticises what is “a change in policy from the Government”, referring to the level of direct interference from the Department. 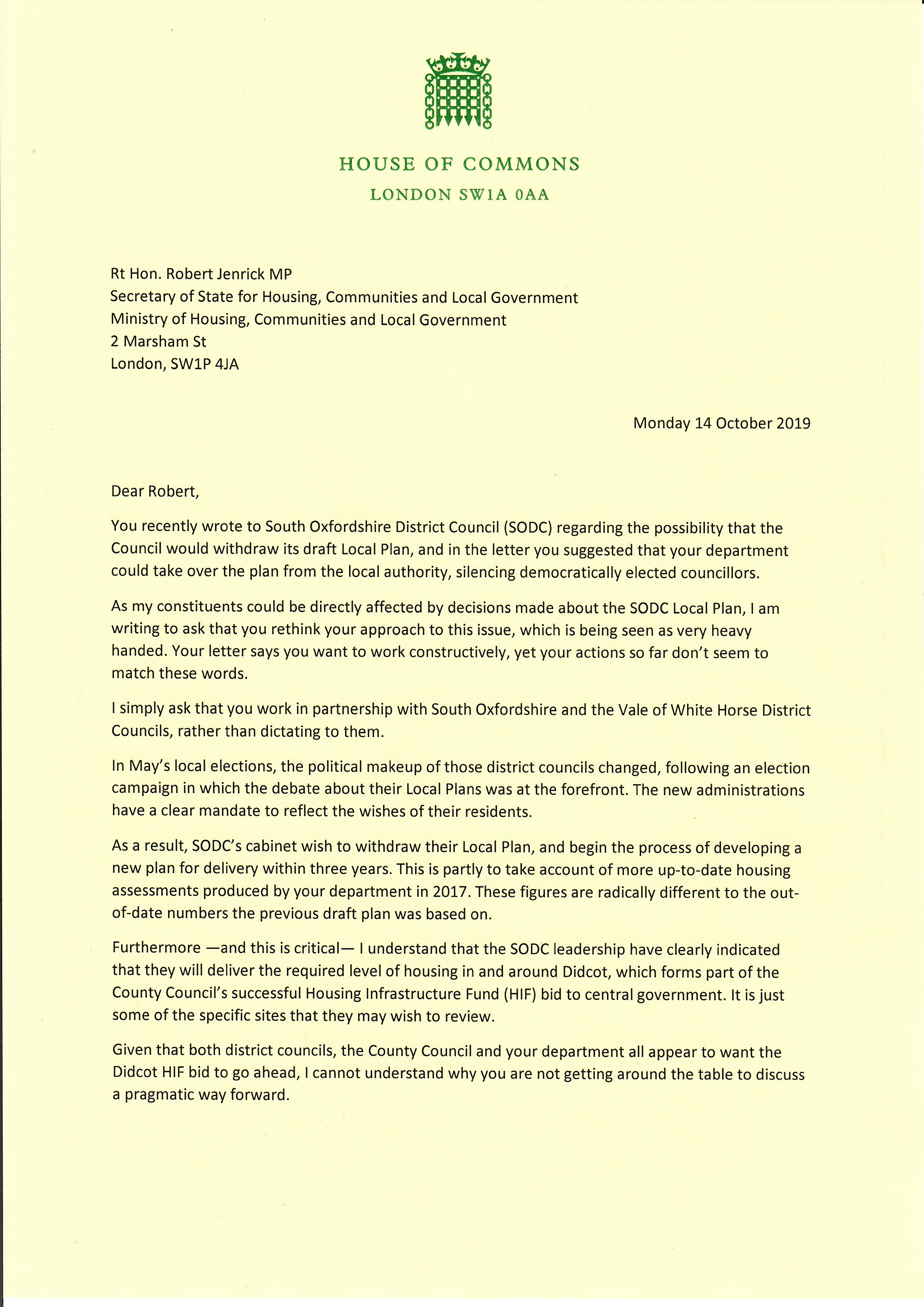 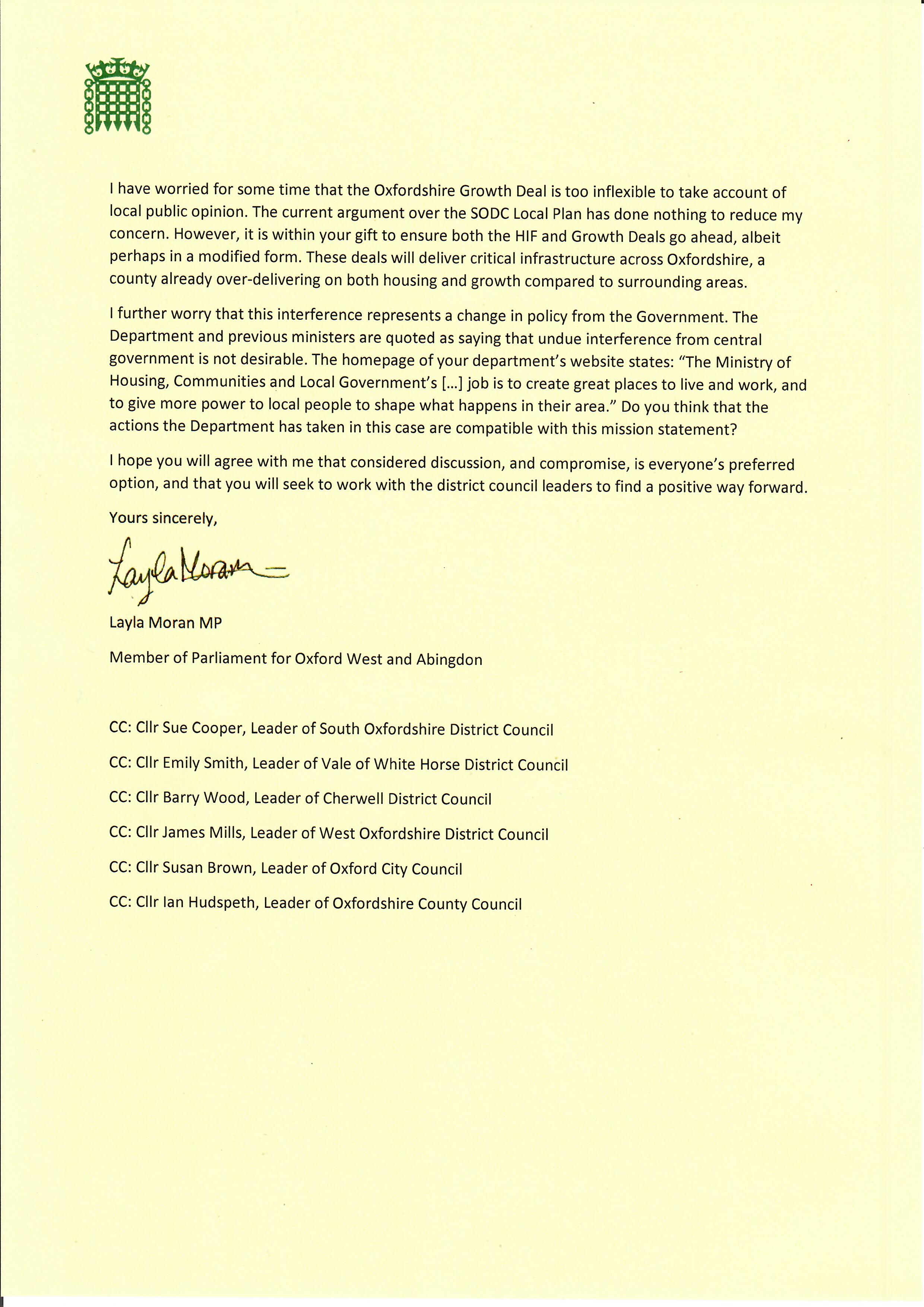 “The Government is in danger of silencing democratically elected councillors, and this heavy-handed approach needs to stop. I have asked Robert Jenrick to work with the local councils, rather than dictating to them.

“South Oxfordshire District Council Cabinet have made absolutely clear their reasons for why they want to withdraw the Local Plan; the Government’s own housing assessments have been updated and are radically different to those the draft plan was based on.

“So there’s no excuse for this level of interference from the Government, and I have urged the Secretary of State to get around the table with Oxfordshire’s council leaders to come to a pragmatic solution.

“With such a febrile and hostile environment in Parliament, Oxfordshire’s political leaders can set an example for everyone else to follow. It’s time to find a positive way forward.”

Full text of the letter:

You recently wrote to South Oxfordshire District Council (SODC) regarding the possibility that the Council would withdraw its draft Local Plan, and in the letter you suggested that your department could take over the plan from the local authority, silencing democratically elected councillors.

As my constituents could be directly affected by decisions made about the SODC Local Plan, I am writing to ask that you rethink your approach to this issue, which is being seen as very heavy handed. Your letter says you want to work constructively, yet your actions so far don’t seem to match these words.

I simply ask that you work in partnership with South Oxfordshire and the Vale of White Horse District Councils, rather than dictating to them.

In May’s local elections, the political makeup of those district councils changed, following an election campaign in which the debate about their Local Plans was at the forefront. The new administrations have a clear mandate to reflect the wishes of their residents.

As a result, SODC’s cabinet wish to withdraw their Local Plan, and begin the process of developing a new plan for delivery within three years. This is partly to take account of more up-to-date housing assessments produced by your department in 2017. These figures are radically different to the out-of-date numbers the previous draft plan was based on.

Furthermore —and this is critical— I understand that the SODC leadership have clearly indicated that they will deliver the required level of housing in and around Didcot, which forms part of the County Council’s successful Housing Infrastructure Fund (HIF) bid to central government. It is just some of the specific sites that they may wish to review.

Given that both district councils, the County Council and your department all appear to want the Didcot HIF bid to go ahead, I cannot understand why you are not getting around the table to discuss a pragmatic way forward.

I have worried for some time that the Oxfordshire Growth Deal is too inflexible to take account of local public opinion. The current argument over the SODC Local Plan has done nothing to reduce my concern. However, it is within your gift to ensure both the HIF and Growth Deals go ahead, albeit perhaps in a modified form. These deals will deliver critical infrastructure across Oxfordshire, a county already over-delivering on both housing and growth compared to surrounding areas.

I further worry that this interference represents a change in policy from the Government. The Department and previous ministers are quoted as saying that undue interference from central government is not desirable. The homepage of your department’s website states: “The Ministry of Housing, Communities and Local Government’s […] job is to create great places to live and work, and to give more power to local people to shape what happens in their area.” Do you think that the actions the Department has taken in this case are compatible with this mission statement?

I hope you will agree with me that considered discussion, and compromise, is everyone’s preferred option, and that you will seek to work with the district council leaders to find a positive way forward.