Layla Moran, MP for Oxford West and Abingdon, has written to the Secretary of State for Transport, Grant Shapps, urging him to work with Highways England and Oxfordshire County Council to “bring forward the completion date” of the Lodge Hill diamond junction on the A34 to before 2022.

Delivery of the junction has been the subject of continuous delays since funding was secured in the summer of 2017, with county council figures at that time indicating that the scheme could be completed by 2020. In an answer to a parliamentary question asked by Layla last week, the Minister of State for Transport George Freeman said that the project partners were aiming for “completion in early 2022.”

In October 2019, Layla wrote to Grant Shapps urging a review of the situation, following news that there had been a lack of progress in the detailed assessment of the site.

The MP raised the issue in her maiden speech in Parliament in 2017 and has continually pressed the Government to take action, saying that Lodge Hill “came up time and time again on the doorstep” during the recent General Election.

“Lodge Hill has suffered delay after delay, and so many of my constituents are rightly exasperated at this situation.

“First it was 2020, and now it’s ‘early 2022’. We not only need a firm deadline by which the interchange should be delivered, but for the Department for Transport, the County Council and Highways England to work collaboratively to work for completion before 2022.

“The residents of Abingdon and users of the A34 deserve better than this situation, and to know when they can expect the diamond junction at Lodge Hill to finally appear.

“I look forward to hearing from the Government in due course, and for Lodge Hill to finally become a reality.”

Below is the full letter Layla sent to Grant Shapps as well as text of that letter; 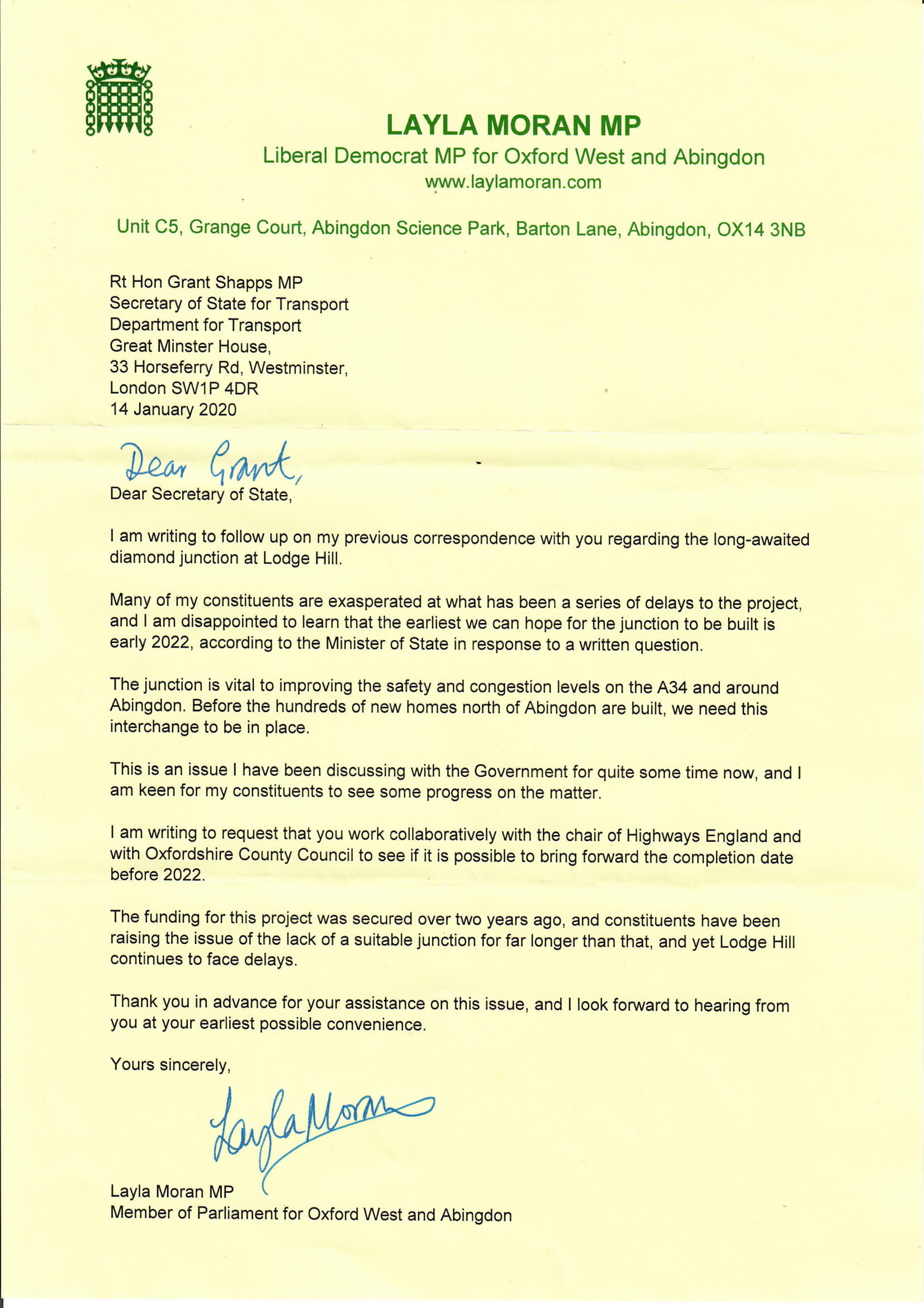 Secretary of State for Transport

I am writing to follow up on my previous correspondence with you regarding the long-awaited diamond junction at Lodge Hill.

Many of my constituents are exasperated at what has been a series of delays to the project, and I am disappointed to learn that the earliest we can hope for the junction to be built is early 2022, according to the Minister of State in response to a written question.

The junction is vital to improving the safety and congestion levels on the A34 and around Abingdon. Before the hundreds of new homes north of Abingdon are built, we need this interchange to be in place.

This is an issue I have been discussing with the Government for quite some time now, and I am keen for my constituents to see some progress on the matter.

I am writing to request that you work collaboratively with the chair of Highways England and with Oxfordshire County Council to see if it is possible to bring forward the completion date before 2022.

The funding for this project was secured over two years ago, and constituents have been raising the issue of the lack of a suitable junction for far longer than that, and yet Lodge Hill continues to face delays.

Thank you in advance for your assistance on this issue, and I look forward to hearing from you at your earliest possible convenience.