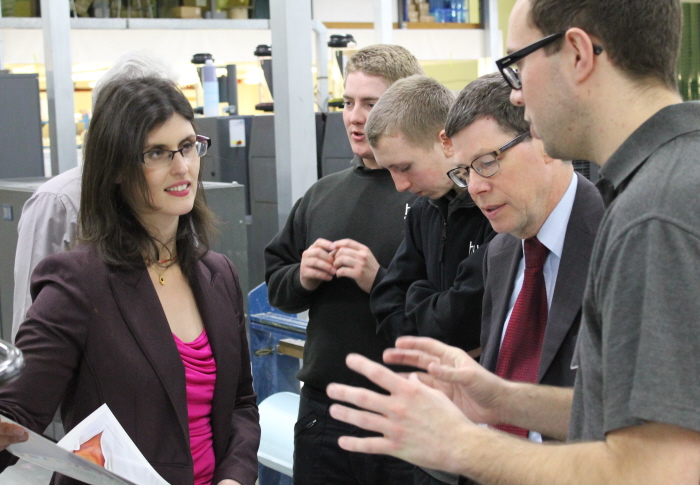 Layla toured the multi-award winning, Kidlington based, Hunts Paper & Pixels' facilities with Kidlington Lib Dem Councillors Doug Williamson and Tim Emptage, spoke to staff about the opportunities they are offering and met apprentices Bradley and Tom (pictured left with Layla).

Commenting after her tour, Layla said: "It is great to see an excellent local company like Hunts Paper & Pixels offering apprenticeships in different areas of the business so that young people like Bradley and Tom have such a fantastic opportunity to get started in their chosen careers."

Championed by Business Secretary Vince Cable, the Lib Dems in Government have consistently pushed for more apprenticeships to be made available in a wide variety of industries. As a result, more than 1.5 million apprenticeships have been started since 2010. This constitutes the biggest expansion in the number of apprentices since the 1950s.

In Oxford West and Abingdon, Layla has been campaigning to double the number of businesses which take on apprentices. Between May 2010 and March 2013, 1,430 new apprenticeships have been undertaken in the constituency.

"It is fantastic that so many businesses in the local area have opted to take on an apprentice since 2010. But we can still achieve more. I hope many more businesses will take advantage of the schemes which the Lib Dems in Government have initiated and benefit from having great people come and work for them, like Bradley and Tom here at Hunts," said Layla.