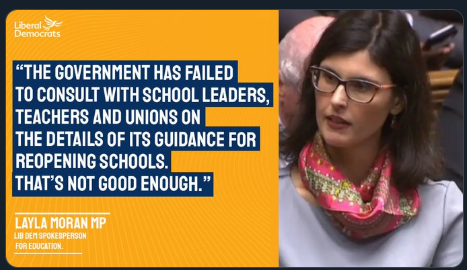 Following securing an Urgent Question in the House of Commons yesterday, Liberal Democrat Education spokesperson Layla Moran has called on the Government to release the scientific advice for reopening schools without delay.

Layla also called on the Secretary of State for Education to clarify "what he thinks ‘safe’ actually means?" in regard to the safety of children returning to school, as well as condemning the Government for failing to consult with teachers and unions.

Following the Urgent Question, Layla Moran MP for Oxford West and Abingdon, said: "Every day that schools remain shut, the disadvantage gap widens and vulnerable children risk falling through the cracks. But that doesn’t mean we should open schools before it’s actually safe.  "The Government has failed to consult with school leaders, teachers and unions on the details of its guidance for reopening schools, and that’s just not good enough. We need reassurance that the decisions are being made based on public health advice only, and not economic fears.

"That’s why I’m calling on the Government to publish all scientific advice it has received on this today, and for a guarantee that all children, of all ages, will be given the equipment and funding to learn safely, either at home or in school."

You can watch Layla ask her Urgent Question here.