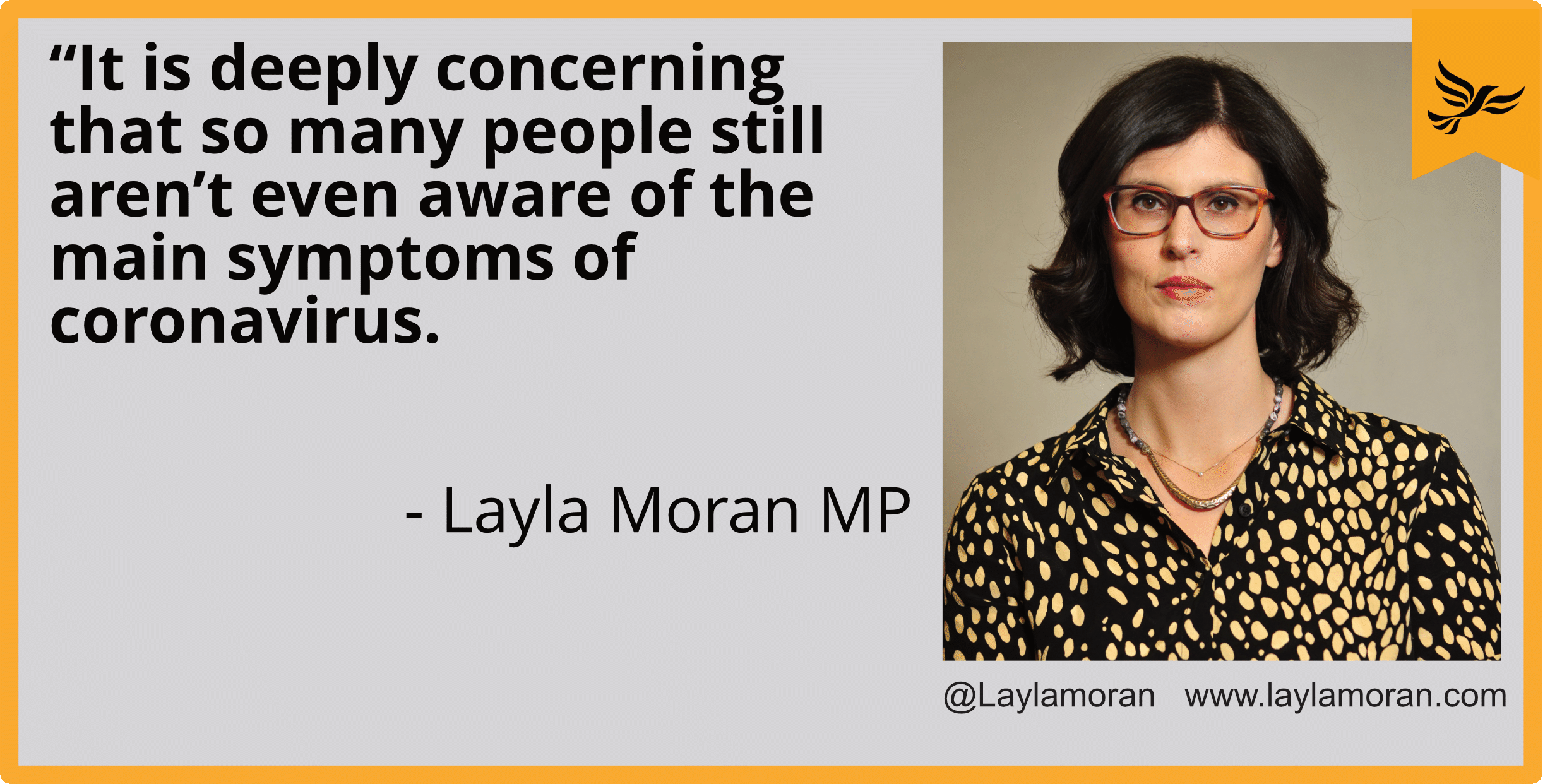 Layla Moran MP has called on the government to urgently step up its communications campaign on coronavirus after official documents revealed over one in three people still aren’t aware of the main symptoms. Layla also called for the daily coronavirus press conference to begin again immediately to ensure key messages are conveyed to the public.

Recently published minutes from Sage revealed warned that “there are still large numbers of people without a basic understanding of some elements of COVID-19, including awareness of symptoms,” adding that a cough or fever is only recognised by 65% of people.

The Sage advice, from 23 June, calls on the government to create guidance to “engage communities and deliver effective communications.” Separate Sage papers state that “Cabinet Office polling shows that trust in government communications has shown a steady decline since early April.” It comes after criticism of the government’s approach to announcing the lockdown in Northern England late on Thursday evening.

The ongoing cross-party inquiry into the coronavirus chaired by Layla Moran is inviting evidence from public health messaging experts on the approach taken by ministers to communicating key messages to the country.  This week the inquiry will be hearing from bereaved families and those suffering "long Covid," who will also be asked about how effective the government's communications have been to date.  The inquiry will produce recommendations throughout the summer, which Boris Johnson has committed to reviewing.

Last week, the inquiry heard from the British Medical Association which criticised a lack of clarity from the government on messaging on mask-wearing and social distancing. Dr. Chaand Nagpaul, chair of the BMA’s council, said: “Do you think any member of the public understands what one metre plus means? What does the plus mean? Many don’t really understand this because it’s not clear and they’re not social distancing.”

Liberal Democrat MP Layla Moran said:  “It is deeply concerning that so many people still aren’t even aware of the main symptoms of coronavirus.

“The government urgently needs to step up its communications and provide clearer guidance to the public, including by immediately reinstating the daily press conference.

“The vast majority of people want to do the right thing but have been left confused by the mixed messaging we’ve seen over the past few months.

“It’s crucial that the government learns from these mistakes ahead of a second wave and puts in place an effective communications strategy as SAGE advisers are calling for.”